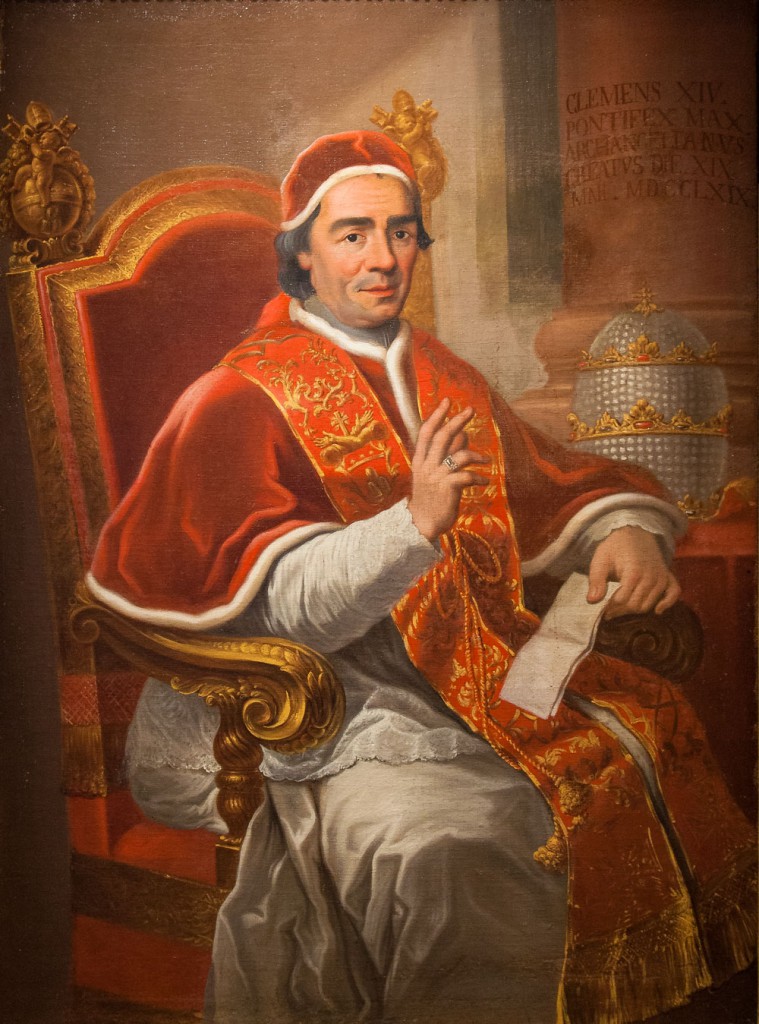 Giovanni Vincenzo Antonio Ganganelli was born on the 31st of October 1705, at No. 38 in via Pip Massani.

His family came from S. Angelo in Vado, in the Marche, but his farther Lorenzo, a doctor, moved to our town in 1699 in order to pursue his medical career. After his premature death (1708), the family was forced to move to Montegridolfo.

In 1723 Giovanni Vincenzo Antonio became a Conventual Franciscan friar in Urbino and in memory of his farther he took the name of Friar Lorenzo. He was appointed Cardinal in 1759, and on the 19th May 1769 he was unanimously elected Pope by the members of the conclave.  He took the name of Clemente XIV, in memory of his predecessor, Clement XIII. He died in Rome on the 22nd September 1774, after a pontificate of only five years.

His most important act as pontiff – and certainly the most remembered – was the suppression of the Jesuit order, decreed in 1773. The religious order was founded by St. Ignatius of Loyola about two centuries before.  Their main objective was to reaffirm the value of the traditional Catholic doctrine and the dominance of the Church of Rome over the Protestant Church. According to some historians, the dissolution of the Jesuits, who in the meantime had become too powerful, was decided only because of the strong pressures put upon Pope Clemente XIV by Spain and other Bourbon courts. This interpretation, however, is too simplistic since it implies that Pope Clemente XIV was just a tool used by the higher powers who had influenced his election as Pope. The reality is that with this decision, which he may or may not have made consciously, he set in motion the process of renewing the predominant ideas governing the society of the 18th century,  while at the same time it contributing to the crisis of the old regime, of which the Jesuits were a key component.

It is important to remember Pope Clemente’s love for art and his work for the conservation of antique works of art. Thanks to his efforts to recover and purchase several ancient works that were neglected and scattered around Rome or destined to be exported to foreign courts, the important Museum Pio-Clementino was founded. He was the first Pope to make the Vatican a centre heavily involved in the conservation of ancient works of art. His interest in theatre was also significant; it is thanks to him that the Church eventually allowed women to perform on stage.