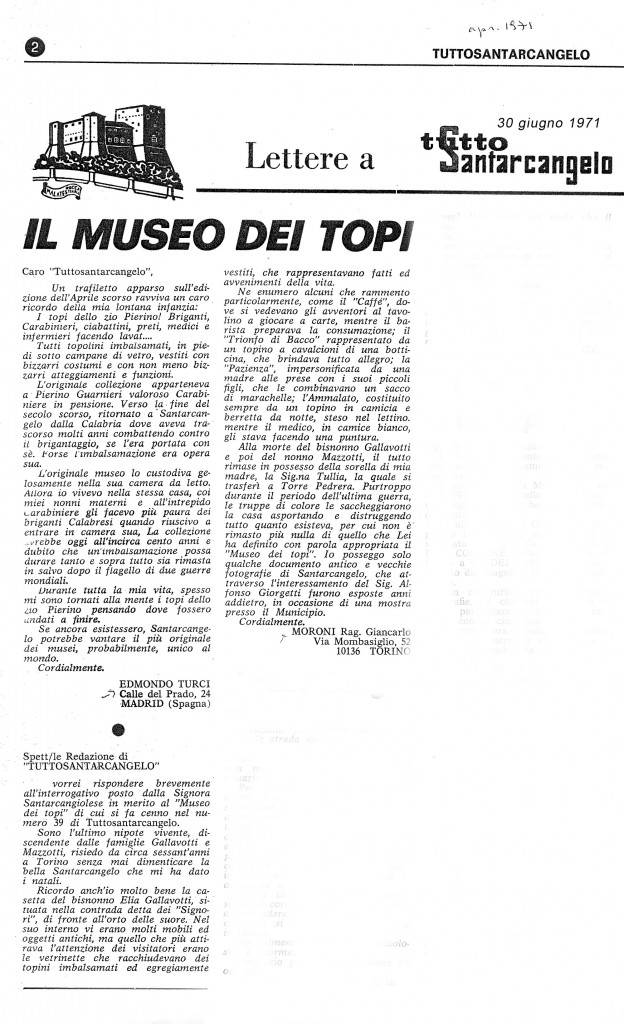 Elia Gallavotti was born in Santarcangelo in 1820 and worked as a bookkeeper at the town hall, a profession that had been planned for him by his mother, which he undertook reluctantly.

He later married Lucrezia Galliani, they formed a strong and prosperous couple and decided to start their own family business.

What did the Gallavottis produce?

Their first successful, and most enduring, activity was taxidermy, which in their case consisted of the preparation of small stuffed animals.

Elia Gallavotti (1820-1909) taxidermy works have been researched by many interested in the oddities in the life of Santarcangelo, and his memory is still very much alive!

Elia Gallavotti was a leading figure in Santarcangelo. He held important positions in the town administration: he reorganised the Municipal Archives; he was Secretary to the Town Council and, among other works, he was the author of the much valued “Journal of reports of events in Santarcangelo” (Diario di notizie sulle vicende santarcangiolesi) from 1700 to 1905. He also wrote an interesting autobiography. He fought during the Risorgimento wars and actively participated in defending Vicenza in 1848.

As a municipal employee his financial means were limited, so he decided to make use of the artistic talent that had been apparent from a very early age.

One of the ideas he came up with was to open a photographic workshop, later run by his two daughters, the “Gallavotti sisteres”: a rare example of female photographers in Italy in the 19th century.

Another activity that proved to be particularly fruitful was his taxidermy business involving stuffed mice, started with the invaluable help of his wife. And those poor mice brought him great success: they were incorporated into various little scenes, such as in the operating theatre, with doctor and mice nurses, etc.

The monthly magazine “Tuttosantarcangelo” of the second half of the 20th century (nothing to do with the current “tuttosantarcangelo” produced by the Town Council) published many letters from people with stories about the “stuffed mice”.

In a letter in September 1999 to Elia Gallavotti’s grandson Giancarlo Moroni, Eugenio Antolini (president of the local workers association) asked for information about the famous stuffed mice.

The answer was very detailed: “what attracted visitors the most were the various glass showcases with the stuffed mice representing scenes from daily life, or historical events…” […] “My mother and I only came back to Santarcangelo in 1930, for my grandfather’s funeral, and we were then able to admire the famous stuffed mice. My grandmother explained that my great-grandfather Elia indulged  in the small scale breeding of white mice, which he would then kill and stuff into various positions, and my great-grandmother Lucrezia would then make the dresses and decorations.”

After that letter no more information was forthcoming from Elia Gallavotti’s descendants.