In 1742 Pope Benedict XIV granted the clergy and local community’s wishes by abolishing the two existing parishes (the ancient church dedicated to San Michele Arcangelo and the Church of Sant’Agata) and authorising the construction of a new and unique parish. It was a collegiate church, which means it was governed by a college of Canons, hence its name “Chiesa Collegiata”. It was dedicated to the Blessed Virgin of the Rosary (Beata Vergine del Rosario).

Giovanni Francesco Buonamici, an architect from Rimini, designed the church: its construction began in 1744 and ended twelve years later. The creation of such a large church was possible thanks to the donations made by the local community and the financial resources from the two abolished parishes. The four brotherhoods of Santarcangelo also contributed by putting their altars in the new church. Nevertheless financial resources did come to an end, which meant that the second bell tower was never completed: the dome of the first tower was added only in 1937 along with the stone portal.

In 1779 the most prestigious “organ builders” of the time (Gaetano Callido) was commissioned to build a splendid organ to make the celebration of the religious services even more moving.

This magnificent organ still works today and is visible above the main entrance of the church. 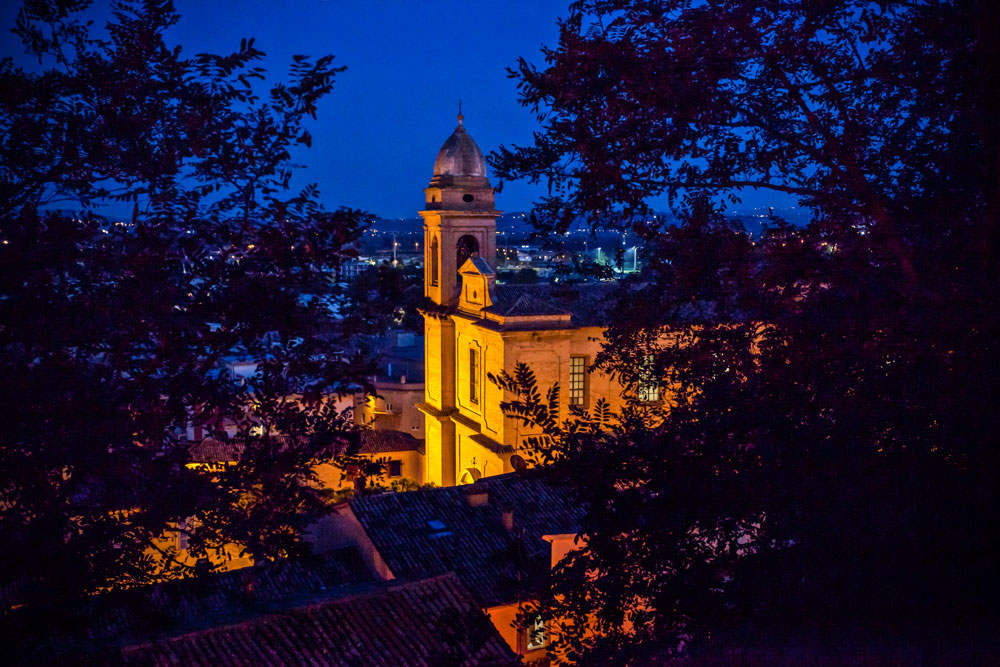 The church exhibits Guido Cagnacci’s “San Giuseppe, S. Eligio e Gesù Bambino”, which depicts the patron saints of the carpenters and blacksmiths who were the commissioners of the painting. The piece is signed and dated 1635 and is the first painting that can be attributed to Guido Cagnacci with absolute certainty. The church also preserves a crucifix from the Giotto’s school of Rimini from the 1300s.